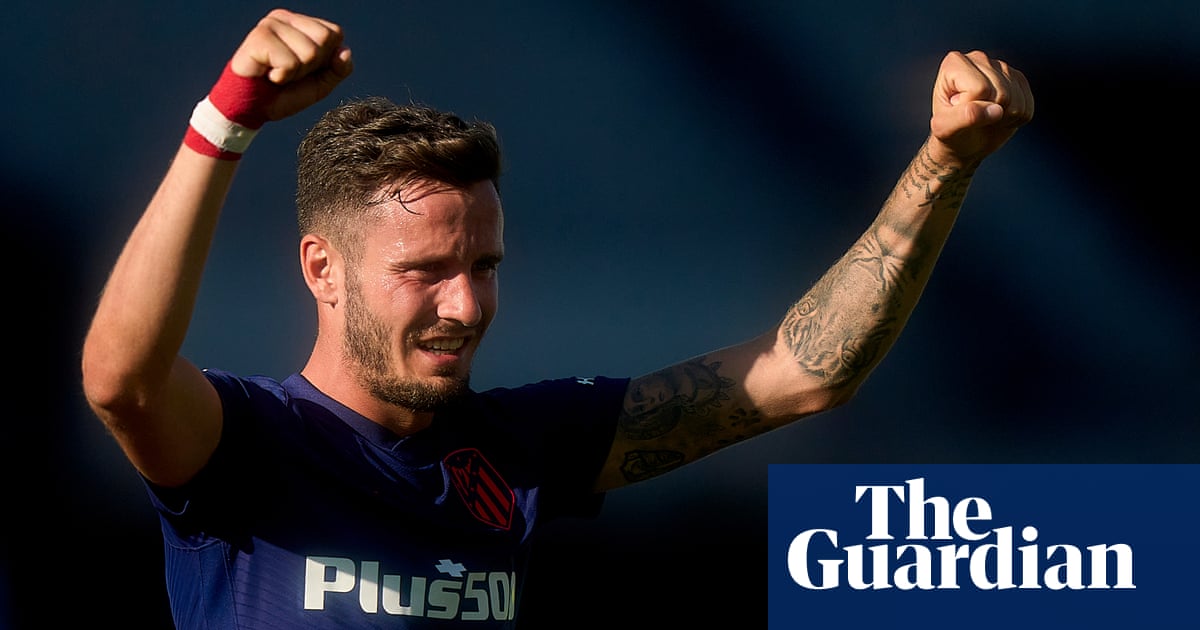 Chelsea are considering a late loan move for Atlético Madrid’s Saúl Ñíguez, but the European champions could face competition for the midfielder from Manchester United.

Atlético are prepared to let Saúl leave on a season-long loan before the transfer window shuts next Tuesday, raising the possibility of the Spain international moving to England. Chelsea could step up their interest if Thomas Tuchel decides that he needs more depth in central midfield and sources in Spain have not ruled out United trying to sign the 26-year-old.

Saúl is regarded as one of the best midfielders in Europe and has become an important player for Atlético after rising through their academy, helping Diego Simeone’s side win La Liga last season. However his future at Atlético has been in doubt for a while and he could up for a fresh challenge after being excluded from Spain’s squad for Euro 2020.

The chance to sign Saúl on loan could make sense for Chelsea, who are looking to end uncertainty over the futures of Andreas Christensen and Antonio Rüdiger by offering both central defenders new deals. Chelsea are unlikely to spend big on a midfielder this summer, with West Ham pricing them out of a move for Declan Rice. However Tuchel could decide that he needs more competition alongside Mateo Kovacic, N’Golo Kanté and Jorginho after loaning Billy Gilmour to Norwich.

Kanté has struggled with injury problems in the past two years and Tuchel, who retains an interest in the Sevilla centre-back Jules Koundé, admitted that he overused Jorginho at the end of last season. However a move for Saúl could depend on Chelsea shifting some of their fringe midfielders before the window shuts, with Ross Barkley, Danny Drinkwater and Tiémoué Bakayoko available. Milan are interested in Bakayoko, while it remains to be seen if Tuchel thinks that Ethan Ampadu and Ruben Loftus-Cheek are capable of covering for Kanté, Kovacic and Jorginho.

Chelsea are also prepared to sell Kurt Zouma to West Ham in order to make space for a move for Kounde. West Ham are ready to pay £25m for Zouma, but the centre-back’s wage demands have left the transfer in doubt. The 26-year-old has asked to be paid £130,000 a week if he is to make the move across London.

While Zouma has fallen down the pecking order under Tuchel, Chelsea have offered Christensen and Rüdiger new contracts. Christensen and Rudiger have both entered the final year of their current deals and Chelsea do not want to lose them on free transfers.

It is thought that Christensen is close to agreeing to sign his deal. However there is less certainty over Rüdiger, who was almost sold by Frank Lampard last summer. The Germany international has been excellent since Tuchel’s arrival in January, but he could choose to leave Stamford Bridge. Real Madrid, Bayern Munich and Barcelona are all monitoring his situation.

Meanwhile West Ham, who are yet to make a permanent signing this summer, are interested in the CSKA Moscow midfielder, Nikola Vlasic. The Croatia international could be an alternative to Jesse Lingard, who impressed on loan at the London Stadium last season. West Ham want to sign Lingard on a permanent basis, but they have been put off by United’s £25m asking price for the 28-year-old.