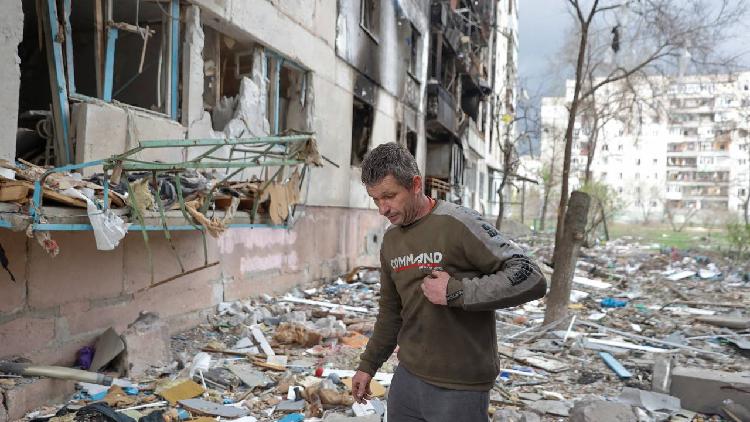 A man walks on the debris of a residential building damaged by a Russian military strike, in the Ukrainian city of Sievierodonetsk on Saturday. /Serhii Nuzhnenko/Reuters

A man walks on the debris of a residential building damaged by a Russian military strike, in the Ukrainian city of Sievierodonetsk on Saturday. /Serhii Nuzhnenko/Reuters

• At least five people have been killed in an attack led by Russian forces in Kharkiv, a Ukrainian health official confirmed.

• Ukraine’s prime minister says forces in Mariupol have not surrendered, despite being given an ultimatum and deadline to do so from Russia.

• The Ukrainian foreign minister says the situation in Mariupol has become a “red line” in talks. Dmytro Kuleba said there had not been any recent diplomatic communications between Russia and Ukraine.

• At least two people were killed and four have been injured in an escalating attack on the eastern Ukrainian town of Zolote, the local governor said.

• The Duke and Duchess of Sussex said they are “standing with” the Ukraine team at the Invictus Games, in a supportive speech at the opening ceremony in the Netherlands.

• Kyiv Mayor Vitali Klitschko has issued stark warnings to refugees not to return as the city endures new missile attacks. Explosions were also reported by officials in the western city of Lviv on Sunday morning.

• A Kyiv ammunition plant was targeted and “destroyed,” Russia’s defense ministry spokesperson Igor Konashenkov said on Sunday. The attack happened near the town of Brovary.

• Ukraine has asked G7 nations for $50 billion USD in financial support to help cover a war-linked budget deficit over the next six months.

• Almost 5 million Ukrainians have fled the country since the start of the conflict, according to UNHCR’s latest refugee report. About 90 percent of the refugees are women and children, following the introduction of a martial law banning men aged 18-60 from leaving the region.

• Ukraine and Russia have failed to agree on Sunday about humanitarian convoys for the evacuation of civilians from war-affected areas, said Ukraine’s deputy Prime Minister Iryna Vereshchuk.

• Russia is worried about increased activity of NATO forces in the Arctic and sees risks of “unintended incidents” occurring in the region, TASS news agency cited Russian ambassador-at-large Nikolai Korchunov as saying on Sunday.

• Pope Francis, marking an “Easter of war,” urged leaders to hear the people’s plea for peace in Ukraine.

• Ukrainian President Volodymyr Zelenskyy said the situation in Mariupol was “inhuman” and called on allies to provide heavy weapons during his latest video address, in a bid to continue to combat Russian forces in the city.

• Russia said Ukraine had lost more than 4,000 soldiers in Mariupol as of Saturday. Kyiv insisted its total troop losses nationwide so far are less than that, between 2,500 and 3,000. Neither side’s figures could be verified.

• Prince Charles, heir to the UK throne, showed solidarity with Ukraine calling them the “innocent victims of conflict” in his official Easter message.

Russia gave holdout Ukrainian soldiers an ultimatum to lay down arms on Sunday in the southeastern port of Mariupol.

Moscow said its forces nearly completely controls the city, in what would be its biggest capture of the nearly two-month fighting.

Several hours after the deadline, there was no sign of compliance by Ukrainian fighters holed up in the Azovstal steelworks overlooking the Sea of Azov.

Having failed to overcome Ukrainian resistance in the north, the Russian military has refocused its ground offensive on the eastern Donbas region while maintaining long-distance strikes elsewhere, including the capital Kyiv.

Russia said its troops had cleared the urban area of Mariupol, the main port in Donbas.

Ukraine’s foreign minister Dmytro Kuleba insisted that the the situation in Mariupol has become a “red line” in talks and described the situation as “dire.”

Kuleba said there had not been any recent diplomatic communications between Russia and Ukraine.

“Mariupol may be a red line,” he told CBS News in an interview on Sunday.